Skip to Main Content
It looks like you're using Internet Explorer 11 or older. This website works best with modern browsers such as the latest versions of Chrome, Firefox, Safari, and Edge. If you continue with this browser, you may see unexpected results.

Guidance on using EndNote software at the University of Adelaide

You can organise references in your EndNote library by creating groups.There are some groups in EndNote which are automatically created and cannot be removed or renamed.  These include permanent groups, such as All References, Recently Added, Unfiled and Trash, as well as temporary groups, such as Imported References and Duplicate References. 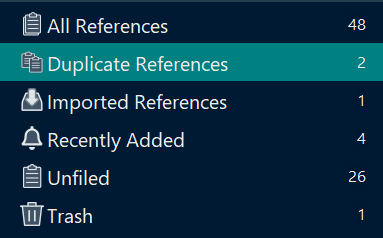 All References displays every reference in the library. Unfiled displays those references that are not part of a group. Trash is a holding place for references you have removed from the library but have not yet permanently discarded by emptying the Trash.
Temporary groups will close as you mange your references, such as removing duplicates, and also when you close your EndNote library.

You can use Group Sets to manage the groups you create. Group sets are used to organise custom and smart groups under a common heading.
Click on Groups > Create Group Set and type in a name for your group set.
New groups can now be created and placed under the Group Sets.   Note that Group Sets are only created as headings - references can only be transferred to a Group NOT a Group Set.

NB All your groups will show in EndNote Online, but not the Group Sets (however the group sets will sync with your library on another desktop). It is useful to name groups within a group set with part of the group set name so that they are easy to identify if you use EndNote Online.

You can also create your own custom groups for your EndNote references:  These can be added to a Group Set or they can be separate groups on their own.
From the Groups menu select Create Group. Type the name of the new group, and you can then drag-and-drop references into this group.  You can also right-click your mouse over a highlighted reference, or selection of references, and select Add References To and choose a group to add them to.
When managing and arranging your references, keep in mind that:

Smart groups are built using search strategies, such as finding authors, abstract words, words in the note field.  Smart groups are automatically updated with any references matching the search criteria as existing references are edited or new references are added to the EndNote library.
It is important to keep in mind that deleting a reference from this group will also delete it from the main library. Combination groups are automatically updated with combined references from other custom or smart groups based on Boolean (AND, OR, and NOT) logic.References in custom and smart groups can be combined under a single group to better organise your EndNote references.